This page is intended to provide newcomers to archery with some basic information about the sport. It describes the different types of bow and arrow in common use in the UK today, as well as other items of archery equipment. It is essential that a newcomer to archery should attend a beginner’s course and get advice from our instructors before buying any equipment of their own.

There are three main kinds of bow used today in the UK – longbow, recurve and compound.

Longbows were developed by the Normans around 1,000 years ago. They used it to defeat the English in the Battle of Hastings in 1066. Subsequently, the English adopted it! The longbow is made of a single straight piece of wood such as yew. By tradition, the longbow is typically shot without a sight (except perhaps for a rubber ring above the handle) and without any other shooting aids. The same bow can be used by both right-handed and left-handed archers.

Recurve bows were invented around 2,800 years ago by the Assyrians. Unlike the longbow, the ends of an unstrung recurve bow are curved away from the archer. This allows the strung bow to be more powerful and shorter than the longbow – ideal for the horsemen who invented it! Unlike the longbow, a one-piece recurve is made of several thin laminations fixed together in the recurved shape rather than one piece of straight wood.

Although one-piece recurve bows are used, particularly for field shooting, most modern recurve bows are made in three pieces – a body (called a riser) with two detachable limbs that fit into each end. These are called takedown bows. The riser is made of wood or lightweight metal alloy cast into shape or machined from a block of metal. The middle of the riser is offset to the side (left for a left handed archer and right for a right handed one) to form the bow window. This allows arrows to be shot more centrally past the bow than with a longbow. An arrow rest is fixed inside the window just below an adjustable, spring-loaded plunger button. The button keeps the arrow from striking the riser. It can be adjusted to tune the bow for the correctly matched arrows being shot (described below). Target archers have a sight fixed to the side of the riser, with a sight ring that can be adjusted sideways, to allow for wind, and vertically according to the distance being shot. A handle with a hand grip is fitted on the riser. The limbs are made of laminations of materials such as wood, glass-fibre, carbon fibre and ceramic. A long rod can be attached to the front of the bow (away from the archer) to stabilise the bow on release of the arrow. The bowstring is made of around 12-18 strands of very strong man-made fibre, twisted together. The middle of the string is wrapped round tightly for 150-200 cms with strong thread, forming a serving to protect the string. Two rings of soft metal or thread are fixed closely together on the serving to form a knocking point to which the notch (called a knock) in the arrow’s tail can be clipped when the bow is about to be drawn.

Recurve bows are used in archery at the Olympic Games and the Paraolympic Games. Although archery first appeared in the Olympic Games in Paris in 1900, it has only featured on a regular basis since 1972 using the rules and rounds established by the international archery federation World Archery. Archers in the UK also shoot rounds and according to rules established by the UK’s Grand National Archery Society Archery GB.

Compound bows were invented in 1966 in the USA. The bow has off-centred pulleys at each end. Steel cables are fixed at the end of each limb. These pass around the pulley at the opposite end (directly or via another linked cable). The free ends of the cables leaving the pulleys are joined together with a bowstring. The pulleys provide a mechanical advantage that makes the bow easier to draw and to hold at full draw. A compound is more powerful and shorter than a recurve. It has a wide bow window enabling the arrow to be centre shot. Many compound archers use additional shooting aids such as a telescopic sight with a horizontal spirit level, a back sight fitted within the string (called a peep sight), a draw length limiter and a mechanical release aid for holding and releasing the string. Owing to the power of the bow and the shooting aids, the compound bow is the most accurate of the three types of bow described.

While longbow archers prefer traditional arrows having wooden shafts with feather flights (fletchings), most recurve and compound archers use modern arrows made of thin tubes of aluminium, carbon fibre or aluminium wrapped in carbon fibre. These are usually fitted with three straight or fluted plastic fletchings. Arrows tips (piles) are made of steel. The end that fits onto the bowstring has a knock cut in the wooden shaft or made as a plastic insert for tubular arrows. Arrows are chosen by weight, by length to suit an archer’s draw length, by the arrow’s stiffness (spine) and by the power (draw weight) of the bow. Easton Archery provide useful data tables (reproduced in archery shop catalogues – such as Quicks that help in selecting arrows according to these criteria that match the bow and the archer using it. Once matching arrows are found, fine-tuning of a recurve bow can be made by adjusting the bow’s plunger-button (if fitted).

There are two main types of shooting practised in the UK – target archery and field archery.

Target archery takes place at an archery club on a target range. Targets are placed on the level at known, standard distances, of 18m (20 yds) to 90m (100 yds) from a fixed shooting line. Each target comprises a circular straw or square foam boss mounted on a stand. It is fitted with a paper target face having concentric white, black, blue and red rings with a yellow (gold) centre. 3 dozen to 15 dozen arrows are shot over 1 to 4 distances according to the kind of round being shot. Arrows are scored and collected by all archers at the same time every end of 3 or 6 arrows. In major tournaments, the time allowed for shooting an end is time-limited under the scrutiny of a judge. Starting and stopping can be indicated by a whistle or with traffic lights. Target archery is shot with all three types of bow.

Field archery takes place in fenced-off areas of open land and woodland. Targets are placed at various distances either made known or undisclosed to the archers. Targets can have faces with rings, as described above, or with pictures of animals or they can be 3-D animal-shaped dummies. Field archery is shot with recurve (often one-piece) and compound bows. By its nature, arrows are often lost during field shoots so some archers prefer to use the less expensive types, including wooden ones.

Longbow and recurve archers usually protect their bow fingers with a leather or plastic tab. Some tabs have a plastic or metal angled top to help archers to locate (anchor) their bow hand under their chin. This is called a platform tab. An archer’s bow forearm is protected from being struck by the string after release by a plastic or leather bracer. A chest guard is often used to ensure that upper body clothing is not caught by the string on release. Archers store the arrows they are shooting in a quiver attached to a waist belt. 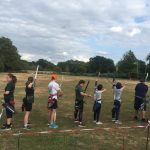 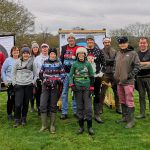 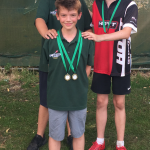 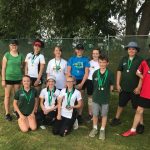 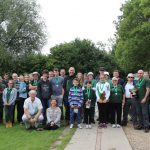 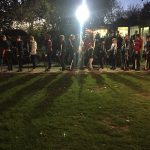 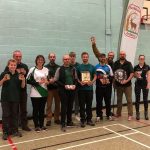 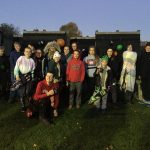 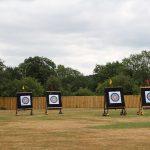 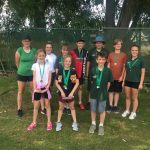 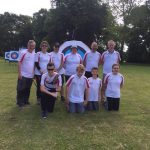 Bowmen of Warfield | Powered by WordPress
Theme by Grace Themes